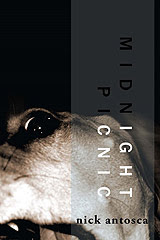 An eerie story about the nature of death, Midnight Picnic is a non-traditional ghost story in which a vengeful child searches for his murderer on the deserted roads of the American countryside, drifting in and out of the afterlife.

“If there’s a real Hell out there in the American heartland, and real ghosts, I suspect Nick Antosca has seen them. Midnight Picnic reinvents the ghost story for our unsettled times—it’s a riveting and terrifying 21st Century Book of the Dead that’s one of the most frightening novels I’ve read in years,”
- Elizabeth Hand, author of Generation Loss, Mortal Love, and Winterlong.

oh. now THIS has my attention. Thanks, B.