FROM THE GOOD FOLKS AT BLUEPRINTREVIEW 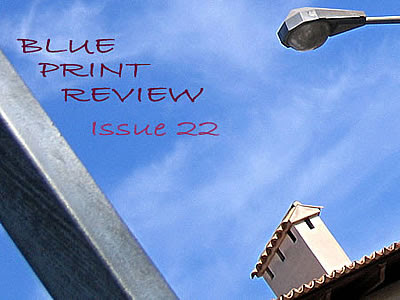 The new issue of BluePrintReview is live. It's a special issue, based entirely on reprints of previously published pieces. The official theme, derived from the pre-published approach is: 're /visit /cycle /turn'.The issue itself starts in Not Technicolor, moves on to The Birth of the Universe and to Antibodies, picks up on Fragments, a Keepsake, -- and various other things and themes -- , and ends some steps from Eternity in South Bronx.

Every featured text and image also includes the link to the original publication, adding an extra dimension to the interconnections and convergence of texts and images.

Extras include: a list of lost+found online magazines, a further-reading page, memories of the days before the internet, and some notes on the process.

editor BluePrintReview
Posted by DOGZPLOT at 7:20 AM